Yep, just finished snow blowing, looks really good out, going for a rip with the son shortly!   Luckily we never lost as much as some of you, this is  a cottage trail yesterday with son and 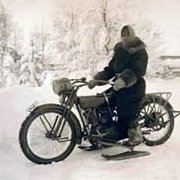 Could have used scratchers today. Was out riding in the Almaguin District today and the rain left the trails very hard and icy with lots of low hanging frozen branches.Talked to Mark from the Highland

All good in HGR territory late last night. As good as its gonna get this season.