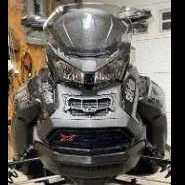 Not much riding, spent the day clearing trails for Tall Pines.

I just got back from 5 days in Quebec.    We saddlebagged it to a different lodge/hotel every night.    Trails were "good".   Not amazing, but better than what we have in the South.

Since it's cold out today, the boy wanted to test out the new coat, helmet and goggles for "warmth". Says its perfect- no drafts -toasty warm.